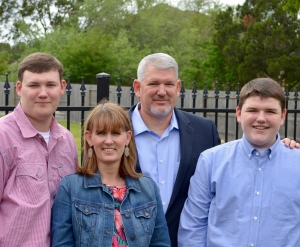 Writ and his wife, Kim, have lived in Round Rock since 1997. They have two sons – a senior and a freshman in high school. Writ, along with two of his brothers, own Hill Country Payroll, a family business founded by their father in 1995. Hill Country Payroll is proud to be in their 23rd year of serving small and mid-sized businesses in Central Texas. He has a BA with a major in Economics and a minor in Business Administration from the University of Texas at Austin.

Writ was first elected to the Round Rock City Council in 2015.  He was appointed by the Council to the Board of Directors of the Round Rock Transportation and Economic Development Corporation and has served in that capacity for 2 years.He is an active investor in the Round Rock Chamber of Commerce. His service includes 7 years on the Chamber’s Board of Directors including a term as Chair of the Board during 2012. He is a 2008 graduate of Leadership Round Rock. Writ was named the Chamber’s Member of the Year in 2010 and was the Outstanding New Member in 2007.

After serving on the City of Round Rock’s 2013 Bond Advisory Commission, Writ led the campaign that resulted in the successful passage of the City of Round Rock’s bond initiatives during the November 2013 election. These bond programs will further develop Round Rock’s strong police and fire departments and they will help ensure Round Rock maintains a low property tax rate by strengthening the sales tax base through enhancements at Old Settlers Park. In addition, the City’s parks, trails, and library will all benefit from the additional resources, allowing Round Rock continue to be a great place to raise a family.

Writ served on the Round Rock Economic Development Partnership Advisory Committee for 2 years and had the honor of being the vice chair of the committee for one of those years.

He is a member of the Rotary Club of Round Rock and served as Club President during 2012-2013. Writ serves as a member of the Board of Trustees at St. David’s Round Rock Medical Center and he and his family are members of Palm Valley Lutheran Church.

Writ is also very involved with Round ISD. He has served on the District Bond Oversight Committee and played an active role in the successful campaign to pass RRISD’s 2014 bond program. Writ was a member of the RRISD Partners in Education Board of Directors for over 6 years. He served for 4 years on Site Based Advisory Committees at 2 of his son’s schools. He also coached youth baseball and basketball for many seasons and has served as an adult volunteer for Boy Scouts of America.

Political ad paid for by the Writ Baese Campaign.